Why The PoS Basis Trade Will Generate $100B TVL

Proof of stake revenue provides a new opportunity for investors and funds to collect double digit APR’s on a PoS basis trade pegged to the USD. A basis trade (aka cash and carry) involves buying an asset and then short selling the same futures contract. Traditionally this has been to collect the funding premium on the short but staked digital assets open up the opportunity to earn on both sides of the trade.

In June 2022 Ethereum will migrate from a proof of work network to proof of stake. There are a number of reasons for this which are outside of the scope of this article but it will open up a big opportunity for directional and delta neutral trades.

The Ethereum merge will bring a lot of attention to staking opportunities and digital assets in general but it’s already possible to gain staking rewards on ETH and other assets such as LUNA and SOL. For directional traders, who tend to have a long bias in crypto markets, staking provides a sustainable yield on their digital asset holdings. In bull markets it’s hard to hold a risk averse portfolio and still outperform ETH as it tends to be more volatile and appreciate further than Bitcoin.

Staking rewards which will likely exceed 10% APR post-merge are going to provide “passive income” and portfolio growth in ETH terms for staked ETH holders. For funds looking to allocate large amounts of capital the PoS basis trade could potentially return  around 20% APR on a position which is pegged to the USD.

Holding staked digital assets will earn the staking rewards and then shorting the same quantity of futures contracts to hedge and collect the funding premium. This will appeal even compared to Anchor Protocols @20%APR on UST because risk averse funds will see it as more sustainable and less risky. Large funds and traditional finance firms will be very familiar with the basis trade as it’s been popular in stocks and commodity markets for decades.

Liquid staking tokens make it easier for users to gain exposure to staking rewards. Lido Finance is the market leader in this space and they currently provide five staked digital asset products. 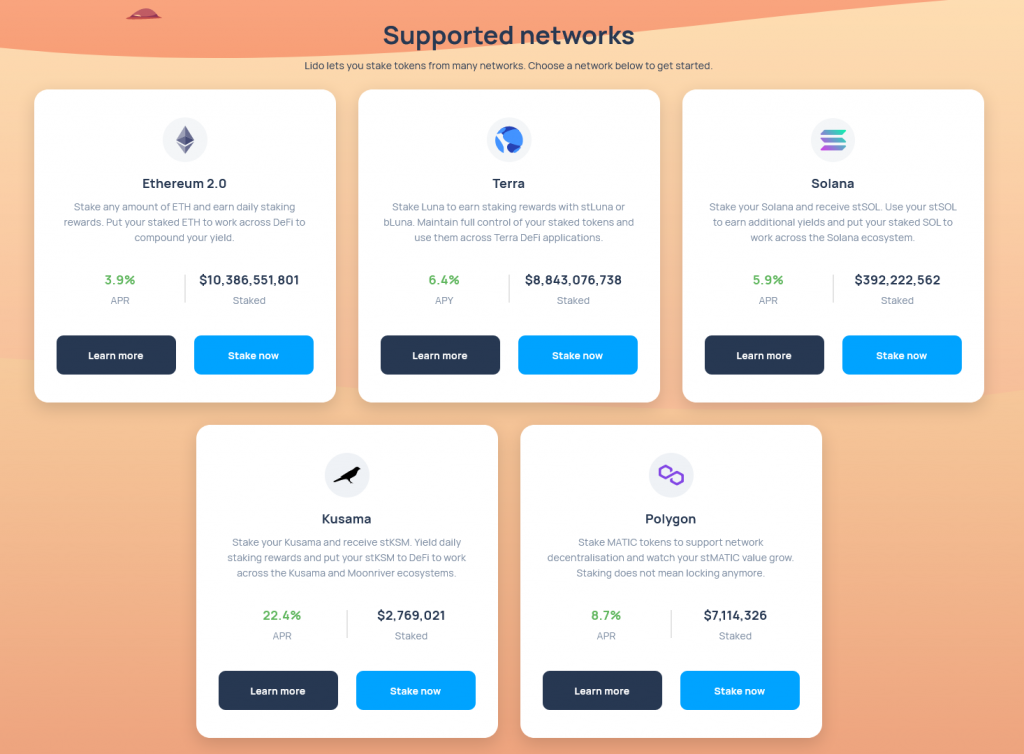 Staked tokens are ERC20 compatible which means they can be moved, purchased and sold just like any other token. But while holding them the token appreciates in value in one of two ways.

One of the most important developments which we are still waiting to see implemented throughout the industry is the acceptance of liquid staking tokens as collateral on futures exchanges. FTX has already accepted stSOL as an approved collateral asset. This is likely because they have a vested interest in the Solana ecosystem but it seems inevitable that other liquid staking tokens will follow across all the major exchanges.

The reason this is important is because it opens up the potential to use coin based collateral on a basis trade. A user can buy 1 stETH on exchange and then short 1 ETH-PERP perpetual futures contract using the stETH as collateral for the futures position. If the price of ETH goes up or down it doesn’t matter because the trade is hedged and can never be liquidated because the collateral will always match the futures contract liability. 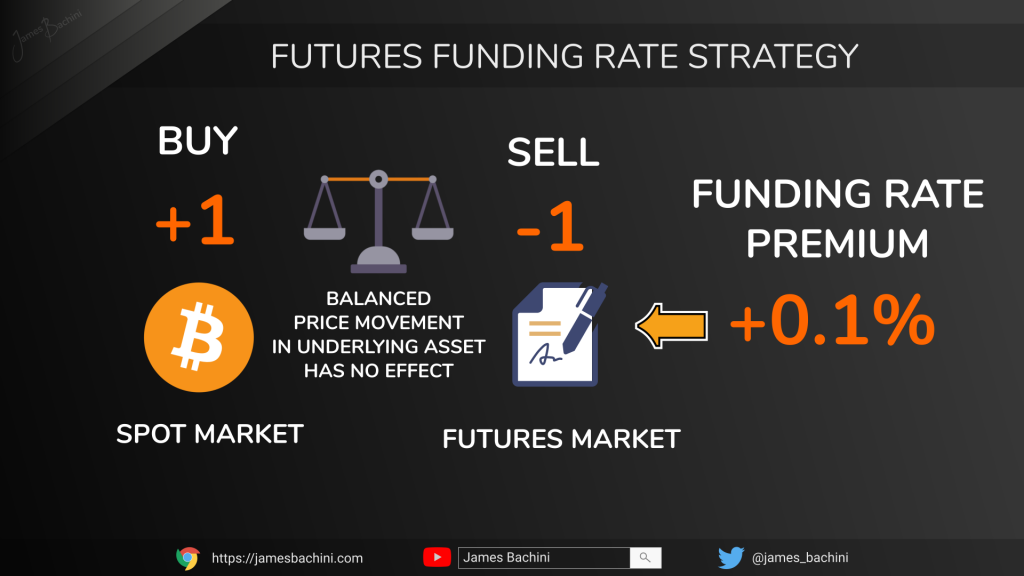 In times of high demand futures funding rates can get exceptionally high and it’s not unusual to see massive APR’s as longs pay shorts a funding premium in bull markets. This combined with the expected >10% APR on Ethereum staking provides a big opportunity for basis trades exceeding 20% while still being pegged to the USD.

This outpaces inflation and is unprecedented in traditional finance markets. Consider the stock market returns an average of 7% a year and investors take on a lot of risk for that exposure.

On the negative side it’s unlikely the high yield on staked tokens will last forever. As more money piles in to the trade it will get diluted and we are already seeing that as ETH pre-merge staking rewards have dropped from ~6% to 3.9% currently. Futures funding rates are also highly variable. The markets are relatively neutral right now from a fear & greed perspective and the average rate on Binance equates to 11% APR. Funding rates can go negative in periods when markets are very bearish as there are more shorts to long positions.

There are a number of secondary affects that should be considered. The potential of staking rewards could cause increased demand for the native tokens. Delta neutral trades don’t do a lot for asset appreciation but it’s likely there will be increased demand from investors that just want to hold stETH and have exposure to the asset as well. Also this is going to increase the TVL of LIDO’s holdings massively.

There is already over $20 billion locked within Lido’s liquid staking tokens. I believe we will see this increase dramatically during and after the merge which will create DeFi’s first $100B protocol.

I first covered LIDO in September 2021 and have held a significant position in the LDO governance token since around that time. I continue to hold as I think the staking narrative and exploding TVL is going to provide a catalyst for token appreciation.

There are significant unlocks on the horizon and it’s by no means a sure bet. There have been periods over the last six months where LDO has been my worse performing digital asset. There are also competitors emerging in the sector, Rocketpool and the rETH token has been gaining some traction recently. I think it’s important that the liquid staking market doesn’t become a monopoly because that could lead to criticisms of centralisation and certainly having a number of different products to choose from is good for market participants.

If you are interested in learning more about Lido Finance and the LDO governance token check their website.

Experimenting With stSOL on FTX

Effective execution is critical on this type of trade and I’ve carried out some experiments in the past using trading bots where I’ve open sourced the code:-
Order Execution Strategy Tests

I used strategy S5 as a starting point for the trade.

The first thing I noticed was that the stSOL/USD market was hardly trading at all. There was a market maker in place, assumedly Alameda, but no one actively buying or selling stSOL currently. For this reason I modified the script to execute the spot trade first and then only once complete execute the futures trade. SOL-PERP on FTX is one of the most popular markets so it was easy to get filled within seconds.

I used a separate sub-account for this trade and the order executed over the course of a few hours at a cost just under 50 basis points. Because the short was executing after the long on each batch there is a small directional bias which possibly affected this as I’d expect the cost to be lower if executed over a longer period of time.

To close the trade I’d simply reverse the script and sell the spot asset prior to closing the short on the futures contract. The whole thing was relatively easy to accomplish and cheap to execute. stSOL is appreciating in SOL terms at 5.9% a year and SOL-PERP funding rate is currently x% APR.

The main issue I had was getting filled on stSOL and this was for a tiny test amount. It wouldn’t be feasible currently for a large firm to use this method. Probably the only way to execute at scale would be to purchase SOL on exchange (SOL/USD trades at higher volumes than stSOL/USD) and then use Lido to convert it to stSOL while at the same time shorting the PERP.

In 2020 we had the summer of DeFi, 2021 was the summer of NFT’s and I think this summer will have a narrative too. “Summer of Staking” is currently my best bet for what that might be as all attention within the industry shifts to the Ethereum merge in June.

This will bring opportunities both directly in the form of staking rewards as well as indirectly with things like the basis trade and the LDO governance token. I’m positioning my portfolio to profit from this potential narrative and market opportunity. As always do your own research as I’m wrong more often than I’m right.

The expansion of blockchain technology is the biggest opportunity I’ve ever seen and I’m focusing on exploring, learning, investing and trading in these markets. I’ll also try and share as much as possible along the way so subscribe to my YouTube channel and connect with me on Twitter.

If you’ve enjoyed these resources could you help share this content on social media and send it to anyone who you think might benefit from it.