Cryptocurrency During The Next Recession

I learnt the hard (and expensive way) not to try and predict stock market timings so I wont guess when the next recession will occur. Like a knock on the door from someone wanting to talk about Jehovah, you know it’s going to happen but it’s normally at the most inopportune time when you don’t expect it.

In this article we are going to look at how a general recession may affect the economy with a focus on the blockchain sector and what may happen to cryptocurrency during the next recession.

Note. I am more biased than a proud mother at a talent contest, I work for a crypto-startup, without auto-correct I can’t even spell economics. I am certainly not a financial advisor and this is not financial advice.

Stock markets are around all time highs, some government bonds have negative returns and every type of debt is out of control. What happens when this house of cards comes crashing down like a Patpong game of Jenga?

Huge sums of money are going to get pulled out of the stock exchange and share prices will plummet. This is almost guaranteed as investors both professional and retail will look for safe havens for their dwindling funds. Let’s look at some of the options available:-

So as a thought experiment let’s put our dark, doom and gloom glasses on, press play on a Metallica album and consider how this could play out.

Stage 1. Something happens, there’s always an event or escape goat that will be addressed as the cause. Governments couldn’t possibly be to blame for decades of irresponsible fiscal policy, it’ll be dotcoms or Lehman brothers or:

Stage 2. Markets spook and the stock market plunges >20% in a short period of time. Hedge funds move money out quickly. Retail investors with money in index funds will be hit particularly hard (no criticism, I <3 index funds).

Stage 4. Bank bailouts, we learnt from 2008. That couldn’t happen again right? Banks leverage ratios would suggest not. Country bailouts like what happened in Greece also possible.

Stage 5. Print money, central banks can’t reduce interest rates to stimulate the economy so quantitative easing comes to the rescue and the governments mint trillions to prop up a failing economy. This causes inflation at levels we haven’t seen before in recent memory.

Stage 6. Panic, people on the street potentially could see their spending power, savings, pensions deteriorate on a day to day basis. Even the government doesn’t lose control of inflation this is going to be a particularly bad time for a lot of investors, workers, families. 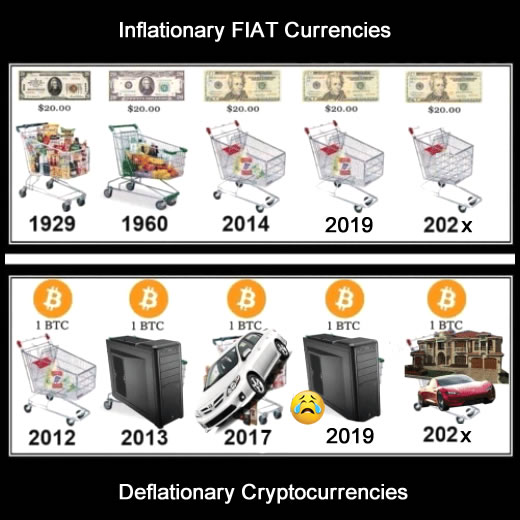 This is where crypto adoption could go mainstream. If every government backed currency is devaluing rapidly then there’s a huge incentive for consumers to switch to cryptocurrency. This is also where cryptocurrency could get blamed, banned, legislated, restricted.

Anyone that thinks that decentralisation means governments can’t intervene is naive. They have 100% control of your access to the internet, including p2p networks. Probably they wouldn’t even need a good block as simply making it illegal would mean 99% of the population are unwilling to break an unjust law and that’ll wipe out any chance of mainstream adoption and the value that’s priced in. British drivers have been known to sit at a broken red light for hours, we need government consent.

At the moment the UK government is cautiously pro-crypto but will they still be when money is flowing out of GBP? Who knows, if it does happen it will probably be at a time of civil unrest so banning it might not be an option politically.

If crypto eventually overtakes fiat currencies and everyone is ordering their Amazon drone deliveries with metamask then we could see a whole new economy emerge from the ashes. Much like the web giants that sprouted like little privacy sapping oak trees from the dust of the dotcom bubble.

Will any of this happen? I have no idea and I’ve learnt not to trust my crystal ball so you certainly shouldn’t trust it either. Donald Trump’s ego, career and legacy are pinned to the Dow Jones reaching 30,000 points by the November 2020 presidential election so he has a vested interest in keeping the good times going for at least another year. Crypto could see another 80% pull back in that time or it could go to zero.

There will be another recession at some point though and I am still hodling and hedging with crypto. If it loses 80% of it’s value tomorrow I’m OK with that too. OK to the point at least where it’ll still be better than being a Manchester Utd fan.

I’ll leave you with this video. Fox has business news apparently and Wall Street Journal columnist Mary Anastasia 0’Grady commentates on Venezuela in 2018 that “this is what happens when you use monetary mechanisms to finance a fiscal deficit”. Probably this wont age well.

The Blockchain Sector newsletter goes out a few times a month when there is breaking news or interesting developments to discuss. All the content I produce is free, if you’d like to help please share this content on social media.